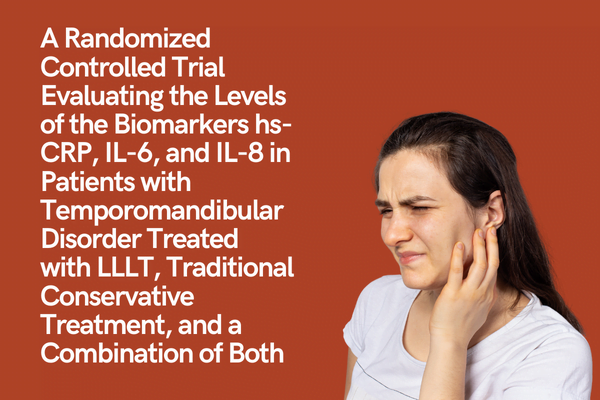 Temporomandibular disorders (TMDs) are a type of idiopathic orofacial pain. Inflammation, particularly elevated circulating levels of high-sensitivity C-reactive protein (hs-CRP), interleukin-6 (IL-6), and interleukin-8 (IL-8), has been linked to pain symptoms. The purpose of this study was to compare hs-CRP, IL-6, and IL-8 biomarkers and pain intensity with different treatment strategies (LLLT, standard conservative treatment, and combination) for TMD patients.

METHODS: A total of 32 participants were randomly included in the study and divided into three groups (Group I, Group II, and Group III) referred from the Dental Clinic, School of Dental Science, HUSM. Patients received LLLT (Groups II and III) in five sessions for the duration of 10 days. Patients in Groups I and III received standard conservative TMD treatment (diet and stress counseling, jaw exercises, physical therapy, which was a hot towel application) by the principal investigator. All blood samples for biomarkers were performed before starting treatments and directly after finishing the treatment protocols, where all results were recorded.