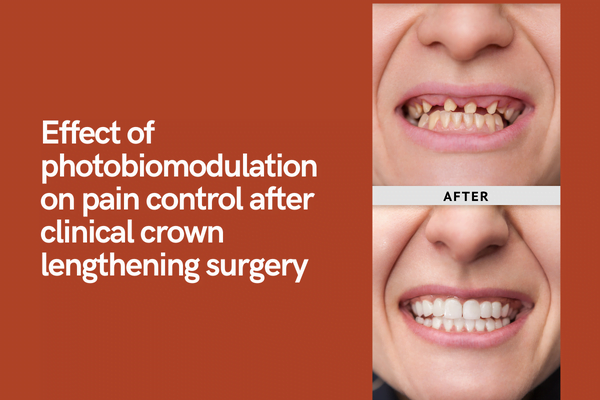 BACKGROUND: Photobiomodulation is a novel technique to reduce pain following different surgeries and treatments. This study aimed to investigate the effect of photobiomodulation on pain control after clinical crown lengthening procedures.

METHODS: Twenty patients were included and randomly assigned to two groups in this single-blind randomized clinical trial. The patients had been referred to the Periodontics Department, Tabriz Faculty of Dentistry, for crown lengthening surgery. In the laser group, diode laser therapy with a wavelength of 860 nm and a power of 100 mW was applied immediately after the surgery on the surgery day and three and seven days after the surgery. In the control group, the laser was turned off, and passive radiation was applied to the area as the test group for 30 seconds per session in non-contact mode. The pain was assessed by a visual analog scale (VAS) questionnaire on the study timelines. Data were analyzed with SPSS 20 using ANOVA and post hoc Tukey tests.