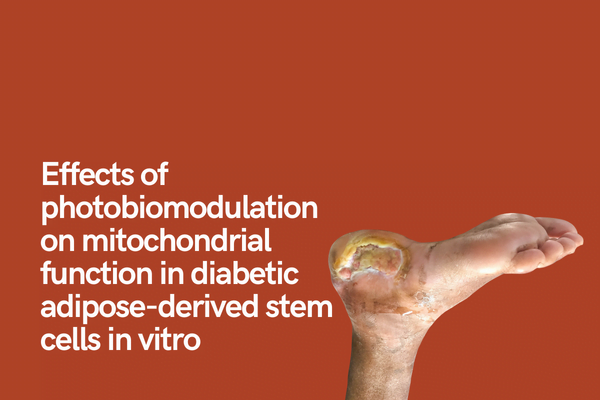 Herein are reported the effects of photobiomodulation (PBM) on adenosine triphosphate (ATP) and reactive oxygen species (ROS) quantification and mitochondria membrane potential (MMP) of the mitochondria of diabetic adipose-derived stem cells (ADSCs) in vitro. Additionally, the expression of PTEN-induced kinase 1 (PINK1) and RBR E3 ubiquitin-protein ligase (PARKIN) genes, which are involved in mitochondrial quality, were quantified. First, type one diabetes was induced in 10 rats. The rats were then kept for 1 month, after which fat tissue was excised from subcutaneous regions, and stem cells were selected from the fat, characterized as ADSC, and cultivated and increased in elevated sugar conditions in vitro; these samples were considered diabetic-ADSC. Two groups were formed, namely, diabetic-control-ADSC and PBM-diabetic-ADSC. ATP, ROS quantification, and MMP of mitochondria of diabetic ADSCs in vitro were measured, and the expression of PINK1 and Parkin genes was quantified in vitro. The results revealed that PBM significantly increased ATP quantification (p = 0.05) and MMP activity (p = 0.000) in diabetic-ADSCs in vitro compared to the control diabetic-ADSCs; however, it significantly decreased ROS quantification (p = 0.002) and PINK1(p = 0.003) and PARKIN gene expression (p = 0.046) in diabetic-ADSCs. The current findings indicate for the first time that PBM has the potential to maintain the function and quality of mitochondrial diabetic-ADSCs by significantly increasing ATP quantification and MMP activity in diabetic-ADSCs in vitro while significantly decreasing ROS quantification and PINK1 and PARKIN gene expression, making PBM an attractive candidate for use in improving the efficacy of autologous stem cell remedies for diabetic patients with infected diabetic foot ulcers.