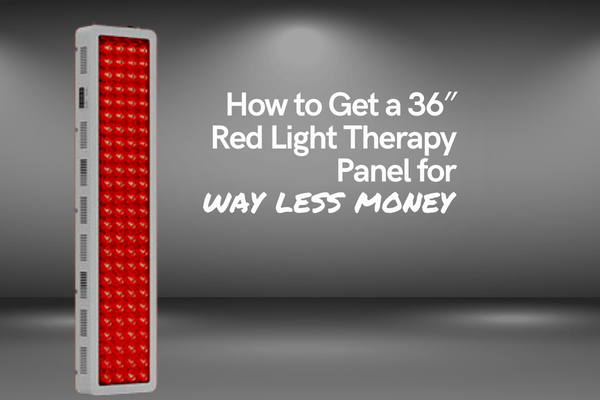 You’re probably aware of that popular red light therapy company that sells its panels for a ton of money. I’m talking about the one that sells their 36″ panel for $1195. After looking at scores of red light therapy devices, I have a theory about why their prices are so high. Is there really anything that special about that panel?

You can buy a heavily marketed 36″ high therapy panel for almost $1200, and that one (that I’m not recommended) does not even come with a door mounting kit. The Bestqool Y-200 panel is a solid choice for way less money.

While there is a science to good LED devices, you don’t need rocket surgeons and brain scientists to build a good panel. Let’s compare the expensive box to a Bestqool Y-200.  The value of a red light box is in its construction, its LED accuracy and its energy output. If you have a sturdy box that outputs the wavelengths you want at the power you need, then you have a good panel.

The Device Which Shall Not Be Named’s device is $1195. Bestqool’s is $609 (before coupons). If you like and buy Bestqool, you’ll save 49% off the expensive brand. You can viwe and buy it on Amazon

or the Bestqool website. I’m about to save you a whole lot of money.

While I am in the habit of speaking my mind, I’m not in the mood to defend myself for my written opinions published on the internet.

This is why I’m not naming the expensive panel company.

If you have been shopping for a red light therapy device then you have considered buying a panel from this company.

Update: This article is about a company that sells expensive products that are not, in my opinion, worth the price.

I compare this product that shall not be named for reason I am about to explain to a solid product I do like, the Bestqool Y-200. This is a 36 in. tall red light therapy panel with a solid build and a good price.

As it turns out, there’s a red light therapy product with the name “Ten,” so I’m changing the name of our mystery product to “49%.” That’s how much you’ll save if you just buy the Bestqool instead of the expensive red light box.

49% does not get specific about its 36 in. device’s wavelengths. The marketing just says “red” and “infrared.”

Bestqool advertises 660 nm red and 850 nm infrared wavelengths. These are well within the healing ranges for red and infrared.

Reaching out to a virtual company can get frustrating fast. There’s no storefront to find a real human. Either you get them through email, or you’re left with a bad device. I want to know where a company is located. I want to know how to reach a human being.

I spent a solid 5 minutes on their site, but could not find an address or a phone number.

49% is based near the Pacific Ocean.

There is no address or phone on their site.

While looking, I found some TrustPilot discussions about 49%’s customer service.

Bestqool is based in the U.S. and Canada.

Their store is on Amazon, so you have about five ways to reach support (contact support through the “contact seller” button on the Amazon product page; leave a product comment; send an email; contact Amazon customer support through chat or email.)

Jacob is one of Bestqool’s employees.

I have corresponded with him several times.

I’ve also seen him reply to comments on Amazon and Reddit.

Bestqool has some of the most responsive customer service I’ve seen in the field.

What do baseball players and regular customers say about 49%?

I imagine that the endorsements are expensive.

Paying athletes to endorse a product is how a product gets so expensive.

The price implies very little about the quality.

Try TrustPilot for some interesting reading.

No baseball players endorse Bestqool, as far as I know. This is how I prefer it to be. I am not a fan of paying extra so someone else’s hero can collect a paycheck.

Bestqool does have glowing reviews. Bestqool’s reviews say things like:

I’d rather pay a reasonable price for a solid product then an exhorbitant price for a baseball player’s endorsement of said product.

Your body has to absorb energy for red light therapy to work. Each LED bulb contributes a fraction of a milliwatt to the device’s energy output.

You get more photon energy faster from 200 bulbs than from 150 bulbs.

Energy output is a hugely important topic and one that most people get wrong. The wrongness starts with the manufacturers using the wrong type of light meter, and then spills over into the advertising.

It’s also common to think of energy as watts used to power a device. We cannot use that value for any meaningful comparison. We care about the milliwatts of photon energy coming out of the device, and not the watts of electric energy going into the device.

This is a hugely important and totally screwed up situation. Energy output tells you how many photons you can expect to reach your body at a given distance.

The numbers are almost universally overstated.  Rather than use this faulty value that is always wrong, there’s a much better way to decide which panel to buy. How much time does the manufacturer recommend per session? And at what distance from the panel? The less time you spend doing red light therapy, the more irradiance (energy output in photons) the light has.

49% suggests 10 minutes at 16-24 inches from the panel. Bestqool suggests 15 minutes but the distance is not clear. Based on their use of a solar meter to measure irradiance — and using only a third of the stated power to handicap out their use of the wrong meter — I am roughly guessing that the Bestqool outputs 12 mW/cm^2 at 16 inches, which gives you .72 J per minute, and it would take 13.8 minutes to get a 10 J dose.

It’s impossible to compare apples to apples because of all the b.s. around measurements and 49%’s failure t0 include key specifications on their product page.  But, even handicapping the Bestqool at 33% of the stated energy value, 13.8 minutes standing 16 inches from the panel is a healthy and hardy A+ rating energy output.

The return period governs how long you have to try a product or get your money back.

I could tell you that 49%’s return period is 60 days, and Bestqool’s is 30 days. This does not tell you the real story.

If you look at the external review site complaints about returns, 49% has difficulty making good on its 60-day promise.

If you look at the Amazon reviews, Bestqool goes way out of its way to make sure customers are happy.

49% puts a lot of dumb bells and moronic whistles on their panel. It has Bluetooth connectivity and wifi connectivity, phone apps, “smart” cooling fans, and a timer. Who cares? The only feature that matters there is the timer. You cannot see your phone whent he light is on, so the app is the height of useless. It is easier to reach out to the panel’s actual controls than to manipulate them from a phone app that you can’t see.

Bestqool has fans and a timer. They do not sell you silliness you don’t need.

VIEW the Bestqool Y-200 ON AMAZON.COM

My high regard for FDA clearance might be falling a bit. Red light therapy lamps are “general wellness” devices, they do not get clinical trials for FDA consideration. An FDA registration says that a company says they tested their products, so they kindly request permission to put an FDA logo on their website. It’s almost, not quite, but almost meaningless.

The fact is that bloggers I trust have measured the 49%’s true photon energy output, and it runs 33% to 50% of the company’s stated value. What good is an FDA registration or clearance or any kind of a “OK” if the product is at least 50% less powerful than the company says it is.

I have used Bestqool’s hook and pulley door mount device..It is a nice, solid, and simple-to-use solution.

VIEW the Bestqool Y-20 ON AMAZON.COM

49% has a 2 year warranty that they appear to have a hard time respecting. Bestqool has a 2-year warranty. When you say “jump,” they ask “how high?”

The science is very mixed on this issue. The Interphone study lasted 11 years and claimed in its abstract that cell phone use does not cause brain cancer. (View my summary of the science in my EMFChannel.com article Mobile Phones Cause Brain Cancer

Yet buried within the study was a finding that 40% of heavy phone users developed brain tumors on the same side of the head as where they tended to use their mobile phones.

Magnetic fields cannot be shielded, but they can be diverted.

You will always see it as “shielded,” because that’s just what everyone says.

In theory, shielding (diverting) these fields should protect you from EMF harm.

I have not tested either device for EMFs.

According to their marketing literature, both 49% and Bestqool reduce your EMF exposure to virtually nothing.

You don’t really need a link to the 49% panel because they have terrible customer service and an overpriced panel. Their high prices are specifically engineered to make you think you’re buying a high-end light. The Bestqool is a solid, well-liked and supported 200-bulb panel which is a solid choice for daily red light therapy.

VIEW the Bestqool ON AMAZON.COM