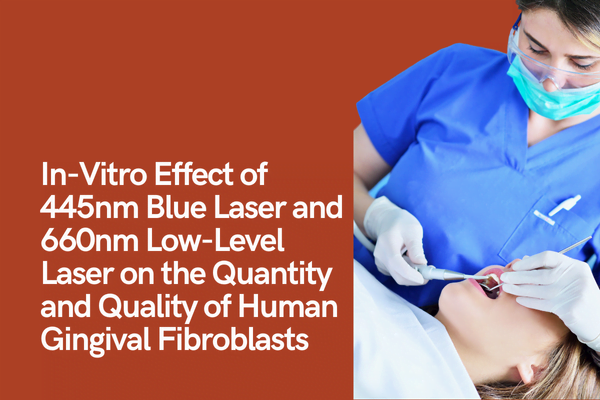 Low-level laser therapy (LLLT) has several benefits in dentistry, including anti-inflammatory effects and increased proliferation. This study aimed to investigate the effect of 445nm blue laser and 660nm low-power laser on the quantity and quality of human gingival fibroblasts in-vitro. In this in-vitro experimental study, 445nm and 660nm lasers were irradiated on the samples six times. After examining the cells on the seventh and fourteenth days, the data were analyzed using ANOVA PASS11 and the post hoc Tukey test. The results showed the positive effect of the 660nm laser on fibroblast proliferation. The viability on the seventh day was the highest in the control group, lowest in the 445nm laser group and highest in the 660nm laser group on the fourteenth day. In the morphological examination, the cells were spherical with narrow appendages in the control group, spindle-shaped with lamellipodia appendages in the 660nm laser group, and spherical with no cytoplasmic appendages in the 445nm laser group. Evidence of necrosis and granulation phenomenon was observed in the 445nm laser group. The use of the 660nm low-power laser, compared to the 445nm laser, has a positive effect on the quantity and quality of gingival fibroblasts.