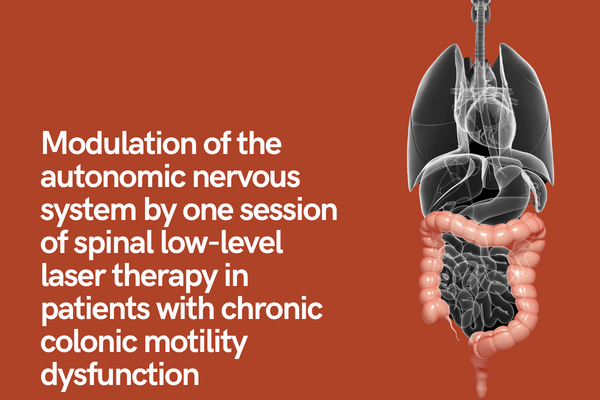 Patients with a defecation disorder may not evoke a normal defecation reflex, or the reflex may be excessive, as a dysfunction of the spinal autonomic nervous system. Treatment with various forms of lumbar and sacral neuromodulation have shown symptom improvement, but potential changes in autonomic functioning are rarely studied. Here we evaluate the effects on autonomic function of a single session of low-level laser therapy (LLLT) on the lumbar and sacral spine in 41 patients with chronic gastrointestinal motor dysfunction. The LLLT protocol used red LED light at a wavelength of 660 nm for 10 min and infrared LED light at a wavelength of 840 nm for 10 min, followed by infrared laser light at a wavelength of 825 nm for 10 min. Effects on the autonomic nervous system were assessed by measuring heart rate variability (HRV) changes. Respiratory Sinus Arrhythmia (RSA) and Root Mean Square of Successive Differences (RMSSD) were used to quantify parasympathetic reactivity; the Baevsky’s Stress Index (SI) reflected sympathetic activity while the ratios SI/RSA and SI/RMSSD were used to show shifts in autonomic dominance. The results indicate that lumbar and sacral neuromodulation using light arrays reduced, whereas stimulation by the laser probes significantly increased parasympathetic activity. The light arrays increased whereas the laser probes significantly decreased sympathetic activity (SI). The entire protocol shifted the autonomic balance toward parasympathetic activity. The comparison of actual vs. sham neuromodulation proved that the change in HRV parameters was due to actual light stimulation and not due to the arrays and probe touching the skin. In conclusion, a single session of LLLT markedly affects autonomic nervous system activity reflected in changes in HRV which is only possible by generating activity in the spinal autonomic nerves. These results warrant a study into the effects of LLLT on restoring autonomic dysfunction in chronic refractory colonic motility disorders.