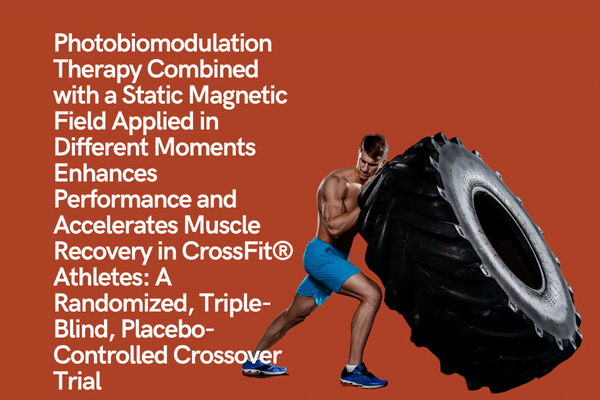 The ergogenic effects of photobiomodulation therapy combined with a static magnetic field (PBMT-sMF) on exercises with characteristics similar to those of CrossFit® are unknown. This study was aimed at investigating the effects of PBMT-sMF applied at different times on recovery and physical performance in CrossFit® athletes by analyzing functional aspects, muscle damage, inflammatory processes, and oxidative stress. This was a prospectively registered, triple-blinded, placebo-controlled, crossover trial. CrossFit® athletes were recruited and assigned to receive one of the four possible interventions. Each intervention included protocols before and after the exercise (referred to as the workout of the day (WOD)). The four possibilities of intervention were as follows: placebo before and after WOD (placebo), PBMT-sMF before and placebo after WOD (PBMT-sMF before), placebo before and PBMT-sMF after WOD (PBMT-sMF after), and PBMT-sMF before and after WOD (PBMT-sMF before and after). The order of possibilities for the interventions was randomized. The primary outcome was the functional test performance. The secondary outcomes were the subjective perception of exertion, muscle damage, inflammation, and oxidative stress. The outcomes were measured before the WOD; immediately after the intervention; and 1, 24, and 48 hours after the WOD. Statistical analysis was performed using repeated measures ANOVA followed by the Bonferroni post hoc test to examine the differences between the interventions at each time point. Twelve participants were randomized and analyzed for each sequence. PBMT-sMF enhanced the performance on functional tests (calculated as a percentage of change) when applied before or after WOD in the assessment performed immediately post-WOD and at 24 and 48 hours later (p < 0.05) compared to placebo and PBMT-sMF before and after WOD. In terms of the secondary outcomes, PBMT-sMF applied before or after WOD significantly decreased the creatine kinase, catalase, and superoxide dismutase activities and interleukin-6, thiobarbituric acid, and carbonylated protein levels (all p < 0.05) compared to the other possibilities of intervention. In addition, PBMT-sMF applied before and after WOD decreased creatine kinase activity at 24 hours and IL-6 levels at 24 and 48 hours compared to placebo (p < 0.05). None of the participants reported any adverse events. PBMT-sMF enhanced the performance of functional tests, decreased the levels of biochemical markers of muscle damage and inflammation, decreased oxidative stress, and increased antioxidant activity in CrossFit® athletes when applied before or after WOD.