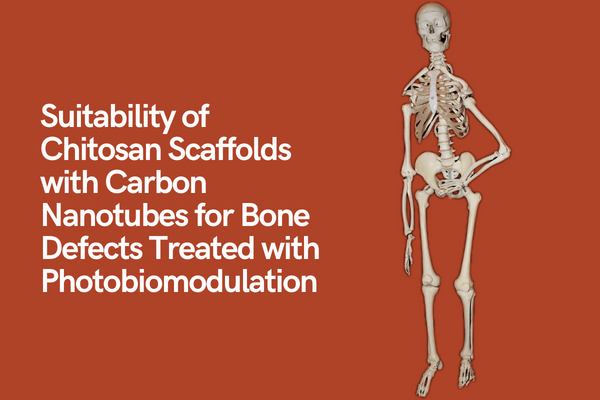 Biomaterials have been investigated as an alternative for the treatment of bone defects, such as chitosan/carbon nanotubes scaffolds, which allow cell proliferation. However, bone regeneration can be accelerated by electrotherapeutic resources that act on bone metabolism, such as low-level laser therapy (LLLT). Thus, this study evaluated the regeneration of bone lesions grafted with chitosan/carbon nanotubes scaffolds and associated with LLLT. For this, a defect (3 mm) was created in the femur of thirty rats, which were divided into 6 groups: Control (G1/Control), LLLT (G2/Laser), Chitosan/Carbon Nanotubes (G3/C+CNTs), Chitosan/Carbon Nanotubes with LLLT (G4/C+CNTs+L), Mineralized Chitosan/Carbon Nanotubes (G5/C+CNTsM) and Mineralized Chitosan/Carbon Nanotubes with LLLT (G6/C+CNTsM+L). After 5 weeks, the biocompatibility of the chitosan/carbon nanotubes scaffolds was observed, with the absence of inflammatory infiltrates and fibrotic tissue. Bone neoformation was denser, thicker and voluminous in G6/C+CNTsM+L. Histomorphometric analyses showed that the relative percentage and standard deviations (mean ± SD) of new bone formation in groups G1 to G6 were 59.93 ± 3.04a (G1/Control), 70.83 ± 1.21b (G2/Laser), 70.09 ± 4.31b (G3/C+CNTs), 81.6 ± 5.74c (G4/C+CNTs+L), 81.4 ± 4.57c (G5/C+CNTsM) and 91.3 ± 4.81d (G6/C+CNTsM+L), respectively, with G6 showing a significant difference in relation to the other groups (a ≠ b ≠ c ≠ d; p &lt; 0.05). Immunohistochemistry also revealed good expression of osteocalcin (OC), osteopontin (OP) and vascular endothelial growth factor (VEGF). It was concluded that chitosan-based carbon nanotube materials combined with LLLT effectively stimulated the bone healing process.