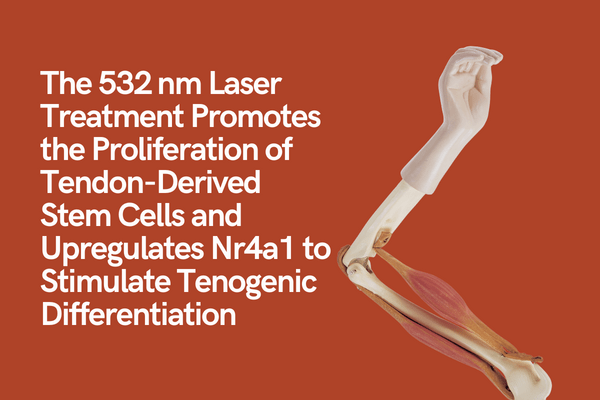 Objective: This study aimed to verify the effect of photobiomodulation therapy (PBMT) with a wavelength of 532 nm on the proliferation and differentiation of tendon-derived stem cells (TDSCs) of Sprague-Dawley (SD) rats. Background: The combination of PBMT and stem cell transplantation with TDSCs provides a new treatment strategy for tendon injury. Nevertheless, the effect of PBMT on the biological behavior of TDSCs and its internal mechanisms remain unclear. Methods: TDSCs were isolated from Achilles tendons of SD rats and identified by cell morphology and flow cytometric analysis. Energy density gradient experiment was performed to determine the ideal energy. Then, TDSCs were treated with PBMT using a wavelength of 532 nm at a fluence of 15 J/cm2 in 532 nm laser group, and the TDSC in control group were not treated with 532 nm laser. Cell response after irradiation was observed to ascertain cell morphology and cell proliferation in the 532 nm laser group and the control group. The RNA expression levels of the key genes of TDSC differentiation, including scleraxis (Scx), tenomodulin (Tnmd), Mohawk homeobox (Mkx), Decorin (Dcn), peroxisome proliferator-activated receptor gamma (PPARγ), SRY-box transcription factor 9 (Sox9), and RUNX family transcription factor 2 (Runx2), were detected by reverse transcription-polymerase chain reaction. Then, gene chip microarray was used to detect the expression of differential genes after 532 nm laser intervention in TDSCs, and the target genes were screened out to verify the role in this process in vitro and in vivo. Results: When the 532 nm laser energy density was 15 J/cm2, the proliferation capacity of TDSCs was improved (2.73 ± 0.24 vs. 1.81 ± 0.71, p < 0.05), and the expression of genes related to tenogenic differentiation of TDSCs was significantly increased (p < 0.01). After RNA sequencing and bioinformatics analyses, we speculated that nuclear receptor subfamily 4 group A member 1 (Nr4a1) was involved in the tenogenic differentiation process of TDSCs regulated by 532 nm laser treatment. Subsequent experiments confirmed that Nr4a1 regulated the expression of the tenogenic differentiation genes Scx and Tnmd in TDSCs. Conclusions: A 532 nm laser with 15 J/cm2 regulated the process of TDSC proliferation and upregulated Nr4a1 to stimulate tenogenic differentiation.