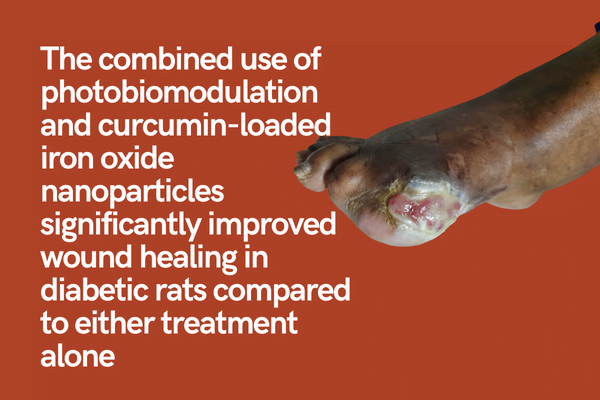 This experimental study examined the effects of curcumin-loaded iron oxide nanoparticles (CUR), photobiomodulation (PBM), and CUR + PBM treatments on mast cells (MC)s numbers and degranulation, inflammatory cells (macrophages, neutrophils), and wound strength in the last step of the diabetic wound repair process (maturation phase) in a rat model of type one diabetes mellitus (T1DM). T1DM was induced in 24 rats, and 1 month later, an excisional wound was created on each rat’s back skin. The rats were then distributed into four groups: (1) untreated diabetic control group (UDCG); (2) rats treated with CUR (CUR); (3) rats exposed to PBM (890 nm, 80 Hz, 0.2 J/cm2) (PBM); (4) rats treated with CUR plus PBM (CUR + PBM). Fifteen days after surgery, skin tissue samples were taken for biomechanical and stereological evaluations. The biomechanical factor of maximum force was observed to be considerably improved in the CUR + PBM (p = 0.000), PBM (p = 0.014), and CUR (p = 0.003) groups compared to the UDCG. CUR + PBM, PBM, and CUR groups had significantly decreased total numbers of MC compared with the UDCG (all, p = 0.001). The results were significantly better in the CUR + PBM (p = 0.000) and PBM (p = 0.003) groups than in the CUR group. Inflammatory cell counts were significantly lower in the CUR + PBM, PBM, and CUR groups than in the UDCG (all, p = 0.0001). In all evaluating methods, the usage of CUR + PBM produced better results than the use of CUR or PBM alone (almost all tests, p = 0.0001). CUR + PBM, PBM, and CUR significantly improved the repair of diabetic skin wounds in type 1 DM rats through significant decreases of MC number, degranulation, and inflammatory cells as well as a noteworthy improvement in wound strength. The impact of CUR + PBM was superior to that of either PBM or CUR alone. It is suggested that CUR + PBM could be used as a MC stabilizer for the effective treatment of some related human diseases.