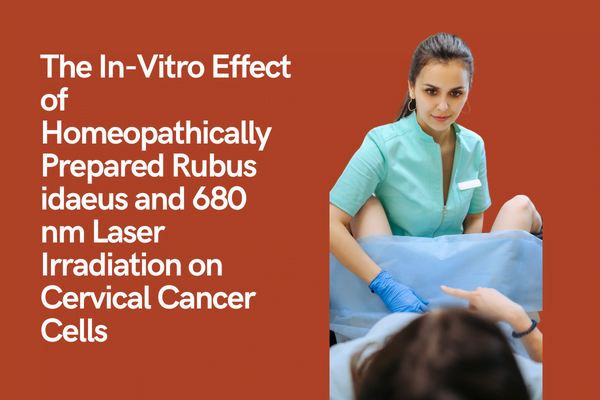 BACKGROUND: Cervical cancer (CC) is the second leading female cancer in South Africa and is the most common in those aged 15 to 44 years. Medicinal plant extracts have been used as homeopathic preparations for health benefits. Rubus idaeus (RI) is used to treat disorders of the female genital tract and produces cytotoxic effects. However, the use of homeopathically prepared RI in combination with low level laser therapy has not previously been explored.

AIM: The study aims to investigate the in-vitro effects of homeopathically prepared RI alone and in combination as a potential photosensitizer with Low-level laser irradiation (LLLI) at fluencies of 5, 10, and 15 J/cm2.

RESULTS: RI D3 alone demonstrated an ability to reduce cellular viability to 59% and also to reduce ATP levels. The subsequent combined treatment protocol of RI D3 with all fluencies of laser demonstrated an increase in cellular ATP and increased LDH levels compared with the control.

CONCLUSION: The increased ATP and LDH levels observed in the combined treatment protocol of 680 nm laser and RI D3 at fluencies of 5, 10 and 15 J/cm2, show that the Warburg effect might have been induced in the CC cells – an increase in glucose uptake and the preferential production of lactate, even in the presence of oxygen. More research, including work on other cell lines, needs to be conducted to identify if RI and perhaps a different wavelength of laser irradiation could have the potential in inducing cell death in cancer cells.